We use cookies in this website. Read about them in our cookies policy. To disable them, configure your browser properly. If you keep using this website, you are accepting those.
OK
Building Integrated Photo Voltaic (BIPV) Solar System
Building-integrated photovoltaic (BIPV) are photovoltaic materials that are used to replaceconventional building materials in parts of the building envelope such as the roof, skylights, orfacades.

Building-integrated photovoltaic (BIPV) are photovoltaic materials that are used to replace conventional building materials in parts of the building envelope such as the roof, skylights, or facades.

They are increasingly being incorporated into the construction of new buildings as a principal or ancillary source of electrical power, although existing buildings may be retrofitted with similar technology. The advantage of integrated photovoltaic over more common non-integrated systems is that the initial cost can be offset by reducing the amount spent on building materials and labuor that would normally be used to construct the part of the building that the BIPV modules replace. These advantages make BIPV one of the fastest growing segments of the photovoltaic industry.

PV applications for buildings began appearing in the 1970s. Aluminum-framed photovoltaic modules were connected to, or mounted on, buildings that were usually in remote areas without access to an electric power grid. In the 1980s photovoltaic module add-ons to roofs began being demonstrated. These PV
systems were usually installed on utility-grid-connected buildings in areas with centralized power stations. In the 1990s BIPV construction products specially designed to be integrated into a building envelope became commercially available. A 1998 doctoral thesis by Patrina Eiffert, entitled An Economic
Assessment of BIPV, hypothesized that one day there would an economic value for trading Renewable Energy Credits (RECs). 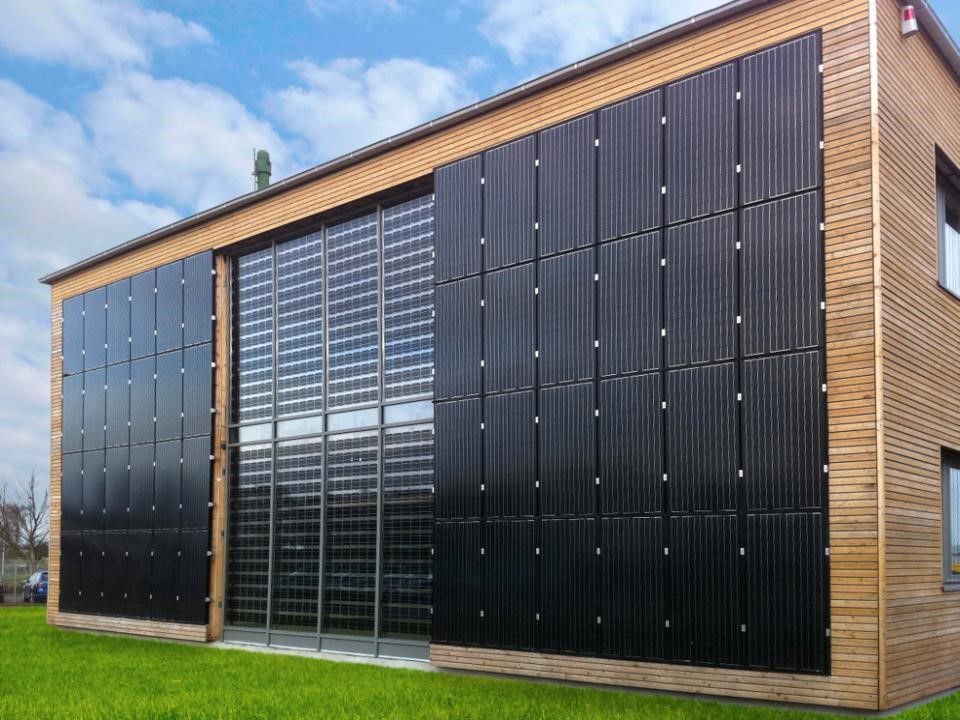 The most widely installed to date is a thin film solar cell integrated to a flexible polymer roofing membrane.

1) Modules shaped like multiple roof tiles.
2) Solar shingles are modules designed to look and act like regular shingles, while incorporating a flexible thin film cell.
3) It extends normal roof life by protecting insulation and membranes from ultraviolet rays and water degradation. It does this by eliminating condensation because the dew point is kept above the roofing membrane.

Facades can be installed on existing buildings, giving old buildings a whole new look. These modules are mounted on the facade of the building, over the existing structure, which can increase the appeal of the building and its resale value.

(Semi)transparent modules can be used to replace a number of architectural elements commonly made with glass or similar materials, such as windows and skylights.

Transparent solar panels use a tin oxide coating on the inner surface of the glass panes to conduct current out of the cell. The cell contains titanium oxide that is coated with a photoelectric dye. Most conventional solar cells use visible and infrared light to generate electricity. In contrast, the innovative new solar cell also uses ultraviolet radiation. Used to replace conventional window glass, or placed over the glass, the installation surface area could be large, leading to potential uses that take advantage of the combined functions of power generation, lighting and temperature control. Another name for transparent photovoltaics is “translucent photovoltaics” (they transmit half the light that falls on them). Similar to inorganic photovoltaics, organic photovoltaics are also capable of being translucent.

1)Solar cells can be incorporated into the facade of a building, complementing or replacing traditional view or spandrel glass. Often, these installations are vertical, reducing access to available solar resources, but the large surface area of buildings can help compensates for the reduced power

2) Photovoltaic may be incorporated into awnings and saw-tooth designs on a building facade. These increase access to direct sunlight whiles providing additional architectural benefits such as passive shading

Sign in to leave a comment
Australian Electricity Increasingly Renewable
The share of Australia's electricity generated from renewable sources has increased in 2019-2020, according to the latest energy data from the Australian Bureau of Statistics.