After focusing for decades on cutting costs, the solar industry is shifting attention to making new advances in technology.

Source Bloomberg: "Solar Is Dirt-Cheap and About to Get Even More Powerful.”

The solar industry has spent decades slashing the cost of generating electricity direct from the sun. Now it’s focusing on making panels even more powerful.

With savings in equipment manufacturing hitting a plateau and more recently pressured by rising prices of raw materials, producers are stepping up work on advances in technology — building better components and employing increasingly sophisticated designs to generate more electricity from the same-sized solar farms.


“The first 20 years in the 21st century saw huge reductions in module prices, but the speed of the reduction started to level off noticeably in the past two years,” said Xiaojing Sun, global solar research leader at Wood Mackenzie Ltd. “Fortunately, new technologies will create further cost-of-electricity reductions.” 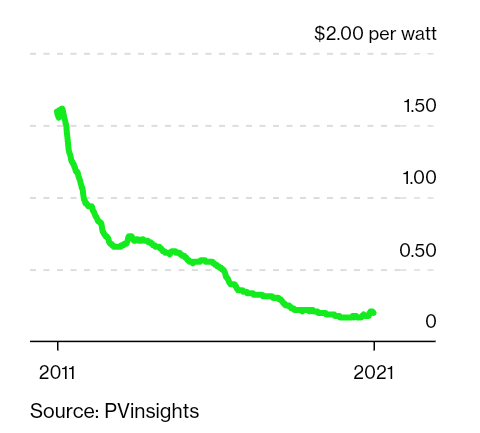 A push for more powerful solar equipment underscores how further cost reductions remain essential to advance the shift away from fossil fuels. While grid-sized solar farms are now typically cheaper than even the most advanced coal or gas-fired plants, additional savings will be required to pair clean energy sources with the expensive storage technology that’s needed for around-the-clock carbon-free power.

Bigger factories, the use of automation and more efficient production methods have delivered economies of scale, lower labor costs and less material waste for the solar sector. The average cost of a solar panel dropped by 90% from 2010 to 2020.


Boosting power generation per panel means developers can deliver the same amount of electricity from a smaller-sized operation. That’s potentially crucial as costs of land, construction, engineering and other equipment haven’t fallen in the same way as panel prices.


It can even make sense to pay a premium for more advanced technology. “We’re seeing people willing to pay a higher price for a higher wattage module that lets them produce more power and make more money off their land,” said Jenny Chase, lead solar researcher at BloombergNEF.


Higher-powered systems are already arriving. Through much of the past decade, most solar panels produced a maximum of about 400 watts of electricity. In early 2020, companies began selling 500-watt panels, and in June, China-based Risen Energy Co. introduced a 700-watt model.


“More powerful and highly-efficient modules will reduce costs throughout the solar project value chain, supporting our outlook for significant sector growth over the next decade,” Fitch Solutions analysts said in a research note last month.


Here are some of the ways that solar companies are super-charging panels: 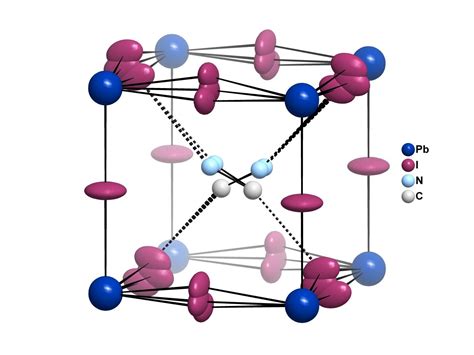 Image Source: PHYSICS org
While many current developments involve tweaks to existing technologies, perovskite promises a genuine breakthrough. Thinner and more transparent than polysilicon, the material that’s traditionally used, perovskite could eventually be layered on top of existing solar panels to boost efficiency, or be integrated with glass to make building windows that also generate power.

“We will be able to take solar power to the next level,” said Kim Dohyung, principal researcher on a perovskite project team at Korea Electric Power Corp., one of several companies experimenting with the material. “Ultimately, this new technology will enable us to make a huge contribution in lowering greenhouse gas emissions.”


Adoption of perovskite has previously been challenged by costs and technical issues that prevented commercial-scale production. There are now signs that’s changing: Wuxi UtmoLight Technology Co. in May announced plans to start a pilot line by October with mass production beginning in 2023. 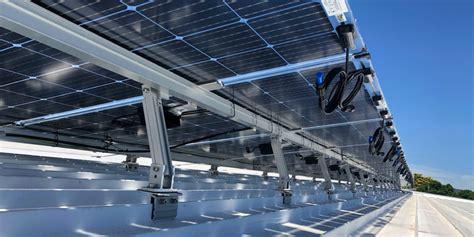 Solar panels typically get their power from the side that faces the sun, but can also make use of the small amount of light that reflects back off the ground. Bi-facial panels started to gain in popularity in 2019, with producers seeking to capture the extra increments of electricity by replacing opaque backing material with specialist glass. They were also temporarily boosted by a since-closed loophole in the U.S. that exempted them from tariffs.


The trend caught solar glass suppliers off-guard and briefly caused prices for the material to soar. Late last year, China loosened regulations around glass manufacturing capacity, and that should prepare the ground for more widespread adoption of the two-sided solar technology.

Another change that can deliver an increase in power is shifting from positively charged silicon material for solar panels to negatively charged, or n-type, products.


N-type material is made by doping polysilicon with a small amount of an element with an extra electron like phosphorous. It’s more expensive, but can be as much as 3.5% more powerful than the material that currently dominates. The products are expected to begin taking market share in 2024 and be the dominant material by 2028, according to PV-Tech.


In the solar supply chain, ultra-refined polysilicon is shaped into rectangular ingots, which are in turn sliced into ultra-thin squares known as wafers. Those wafers are wired into cells and pieced together to form solar panels.

For most of the 2010s, the standard solar wafer was a 156-millimeter (6.14 inches) square of polysilicon, about the size of the front of a CD case. Now, companies are making the squares bigger to boost efficiency and reduce manufacturing costs. Producers are pushing 182- and 210-millimeter wafers, and the larger sizes will grow from about 19% of the market share this year to more than half by 2023, according to Wood Mackenzie’s Sun.


The factories that wire wafers into cells — which convert electrons excited by photons of light into electricity — are adding new capacity for designs like heterojunction or tunnel‐oxide passivated contact cells. While more expensive to make, those structures allow the electrons to keep bouncing around for longer, increasing the amount of power they generate.