We use cookies in this website. Read about them in our cookies policy. To disable them, configure your browser properly. If you keep using this website, you are accepting those.
OK
The New Energy Guide
Making solar, batteries and new energy technology work for everyone 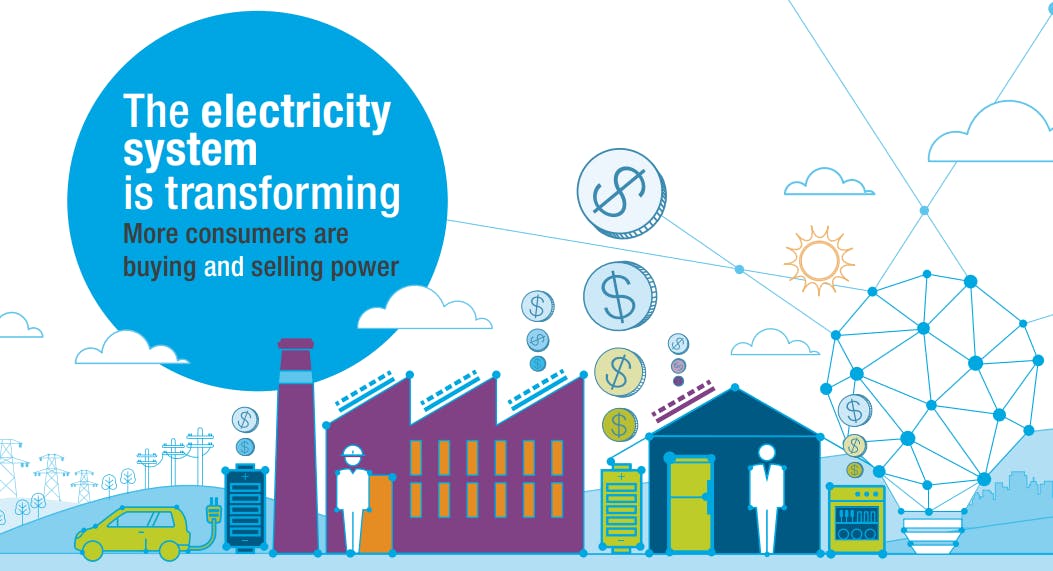 Energy investments by homes and businesses are playing a significant role in decarbonising our energy supply.

This rate of change is world-leading and, aside from the environmental benefits, its impact is being felt at two other levels. For individual households this will help keep power bills down, but collectively this is creating a new energy system. By 2050, rooftop solar systems and other types of distributed energy, will contribute more than 45% of Australia’s electricity.

Australia is working its way towards a smarter, enhanced energy system that can better manage supply and demand pressures, handle peaks and troughs smoothly and efficiently and get the most value from existing poles and wires infrastructure without the need for expensive re-investment.

This must be an energy system that works for everyone, both consumers with solar, batteries and smart management systems and those without these things. This will allow all Australians to harness the sun and reap the benefits of a new technological age.

About The New Energy Guide:

Whether you already have solar PV, are planning to invest in it in the future, are thinking about a home battery or are not in a position to consider any of this new technology, there are implications from this quiet revolution for everyone.

While this guide can answer some of these questions, we can’t advise you of what system to get (if any). For more information:

This guide is designed to help inform energy consumers across Australia about how the rapid growth of rooftop solar is impacting how our energy system works, and what that means for us all in the future.

What are distributed energy resources?

A distributed energy resource (DER) is a small-scale unit of power generation or storage that operates from homes and businesses and is connected to a larger power grid at the distribution level.

The devices that enable distributed energy resources are frequently investments made by customers and are referred to as being ‘behind-the-meter’ because they are on the customers’ side of the energy meter rather than being part of the power equipment owned and operated by an energy company. These devices, such as rooftop solar systems, are often found at homes or business premises.

The name is also given to increasingly common technological devices that help monitor and manage power consumption or generation either for a home or a business.

This small-scale method of power generation is rapidly becoming a major source of Australia’s energy. The Australian Renewable Energy Agency (ARENA) says that “over 40 per cent of energy customers will use distributed energy resources by 2027. By 2050, that figure will grow to more than 60 per cent”.

With 21% of homes already with rooftop solar PV in Australia, we have the highest uptake of solar per capita globally. Today there are more than 2.86 million rooftop solar power systems installed across the National Electricity Market (NEM) supplying approximately 14.7GW of installed capacity. That is the equivalent of a large coal-fired generator dispersed through the country.

In 2019, South Australia operated for a period where 64% of its regional demand was met by domestic PV generation. This hit 70% in October 2020 and by 2025 it could reach as high as 85%. Other mainland NEM regions could be regularly operating close to or above 50% instantaneous penetration.

Battery storage installations are also increasing, adding sophistication and options to generation and storage in households.  This trend will accelerate as states and territories develop incentive schemes. More jurisdictions are offering incentives like interest free loans to install solar battery systems. Digital technologies are opening new opportunities for customers to manage their load and their distributed energy resources.

How distributed energy resources can save you money

One of the most important ways that distributed energy resources can save consumers money is by reducing power bills. Both individual consumers and businesses can install solar panels, wind turbines or other forms of renewable energy on their properties. This helps them power their home or business using alternative power, reducing the amount of electricity they draw from the network.

When choosing renewable resources, it’s important to consider how much energy will be generated and when. This allows you to better manage your energy needs and also your costs. Installing solar panels, for example, may reduce your power costs by as much as 50%, largely depending on the time of day you use the most energy.

What are the different components that make up your energy bill?

Electricity bills for energy consumers have four cost components: the wholesale cost of electricity (around 30-45%), network costs (around 40-50%), the cost of jurisdictional schemes, for example green programs that subsidise the purchase of renewable technology such as solar panels (around 6-10%) and retailer costs and margins (around 10%). Networks set their prices for the services they provide, such as maintaining poles and wires and managing their systems safely. They charge these prices to electricity retailers who then decide how to pass them on to consumers via their electricity bill.

When people or businesses install renewable energy resources, they usually also apply a strategy that reduces energy consumption. Pairing renewables and energy efficiency in this way can help households and businesses rely less on electricity drawn from the grid and save even more money on energy bills.

3. Selling excess energy to the grid

If an individual or business installs an energy generation system that produces more energy than it uses, they can often (but not always) sell that energy back to the grid.

This means that renewable energy can be more than just a money saver. It can also be an additional source of revenue. Selling energy back to the grid can help offset the costs of installing solar panels or another form of distributed energy resource such as a battery.

Selling energy back to the system has been very lucrative for some early solar pioneers who received government subsidies, often 3-4 times the going price for electricity, to boost the income they received. In those cases, the electricity metering arrangement allowed most of those households to export all of the energy they produced back to the grid at a premium rate (that is, they could sell it for more than they paid to buy it).

Those subsidies have been eliminated or substantially wound back over the past decade. These days, solar feed-in tariffs are only around 6-8c/kWh in most places, and many retailers offers plans that pay no feed-in tariff but offer lower overall prices instead to attract customers with solar panels.

This means it now makes more financial sense for households to use the energy they generate first before exporting any ‘left-overs’ to the grid. It also means that by incentivising solar owners to consume their solar-sourced energy before drawing power from the grid, this can push down demand for coal-generated energy and reduce carbon emissions.

As much as energy operators try to avoid them, power outages are part of being connected to the energy network. Any outages can be costly both for individual consumers and businesses, not to mention lost opportunity.

If you own your own generation resources as well as being connected to the grid, you can decrease your chances of experiencing an outage by having a system that can operate as an ‘island’ from the network. This is most common in micro-grids which have the technology to maintain the necessary frequencies and voltages to keep the electricity supply stable without risking the safety of workers repairing the larger grid. Adding a battery also decreases your vulnerability. Battery capacity, cost and efficacy are improving rapidly.