Clean Energy Council has produced the Australian Guide to Agrisolar for Large-scale Solar to assist proponents of utility-scale solar and the landholders and farmers who work with them to integrate agricultural activities into solar farm projects. 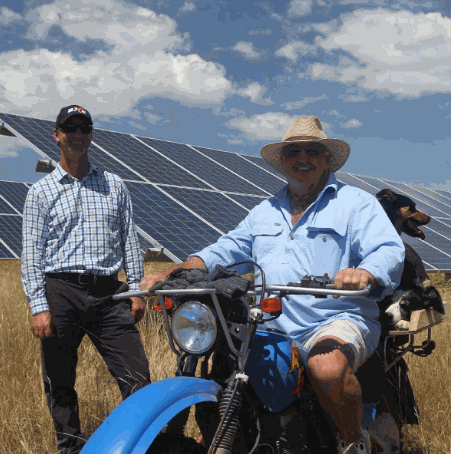 As published on the guide by CEC,

Sharing knowledge and learnings from agrisolar practices from around Australia and the world, this guide will assist proponents of utility-scale solar, and the landholders and farmers who work with them, to integrate agricultural activities into solar farm projects.

Since the mid-2010s, Australia has seen the development of many solar farms in regional areas, reflecting the sharp fall in the cost of solar photovoltaic (PV) technology, making it now the lowest-cost form of electricity.

Agrisolar refers to co-developing the same area of land for both  solar PV power as well as for agriculture. Several forms of agrisolar  have been developed  around the world, with a wide range of  innovative approaches emerging in recent years.

Ground-mounted PV is the most common form of utility-scale solar. In solar farms today, panels are typically connected in long rows (arrays) and mounted on steel frames above the ground so that when tilted, the clearance between the panels and the ground can be as low as 20 cm and up to 3 m on the high side.11These arrays can be fixed in one direction or can track the sun throughout the day, powered by a motorised tracking system. The height of the panels above the ground usually allows sufficient space for animals such as sheep to graze underneath, or for plants and crops to be cultivated for horticultural purposes or biodiversity reasons.

Existing fixed array systems (which do not track the sun) may be unsuitable for some agrisolar practices if the solar panel rows are sited too close together with minimal solar penetration between the arrays.

In land-scarce regions, interest has increased in the deployment of elevated solar panels enabling crops to be grown and harvested beneath panels, such as fruit trees, grapes and cereals. In this model, the panels are raised on stilts or reinforced structures from 2.5 - 5 m high. Initially developed in Japan by engineer Akira Nagashima in 2003, there are several smaller-scale sites and trials in Asia, Europe and South America.  In this model, the PV panels can be spaced to allow sufficient sunshine to filter through to the plants below to allow sunlight to pass through. The distance between structures and the height of the panels may also be wide enough for people, planting and harvesting machinery.Elevated PV plants developed to date have tended to be used in smaller-scale applications rather than utility-scale solar developments (>5 MW) largely due to the taller and more complex structures, as well as the larger area of land required and increased equipment costs.  However, there are examples of large-scale PV installations co-located with crops, including a 700 MW installation over berry crops on the edge of the Gobi Desert in China.13Agrisolar refers to co-developing the same area of land for both  solar PV power as well as for agriculture. Several forms of agrisolar  have been developed  around the world, with a wide range of  innovative approaches emerging in recent years.

Replacing all of Australia’s coal-fired power stations due to retire by 2040 with solar farms would require less than 0.016 per cent of Australia's total land area. 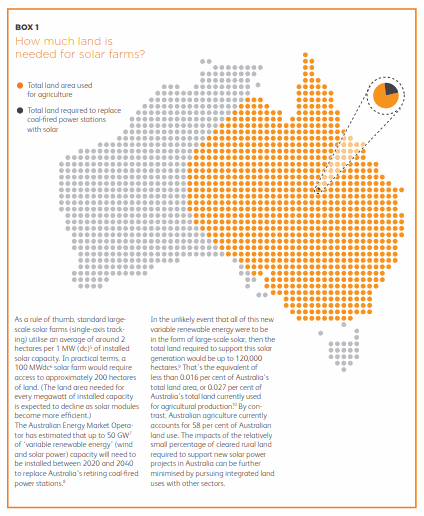 Agrisolar has quickly taken off in Australia in the form of 'solar grazing', which is now the predominant form of land co-use for large-scale solar, both here and internationally. However, other forms of agrisolar are emerging internationally, which support horticulture, viticulture, aquaculture and even cropping activities.  “For a long time, the agriculture and renewable energy sectors have worked in partnership, and this guide is aimed at inspiring new ways in which the sectors can work together to maximise the productivity of land” said the Clean Energy Council's Policy Director for Energy Generation, Anna Freeman.  Some of the key findings of the guide are:  Agrisolar is fast becoming a popular concept internationally as more densely populated countries pursue a clean energy transition, with innovations such as elevated PV panels, PV greenhouses and rooftops being developed to accommodate different types of agricultural practices.  Solar grazing practices are now in place at more than a dozen solar farms across Australia. Where utilised, it has proven to be highly successful for both the proponents and the graziers, providing benefits such as lowering operating costs and improving sheep well being.  Recent international studies have shown that some crops can be grown at the same or even an improved rate under solar PV. The studies suggest this is due to the panels protecting the crops from sun damage and extreme weather events, increasing soil moisture and reducing soil temperature on hot days.  Solar farms can be excellent habitats for bees due to their proximity to native vegetation and flowering plants, as well as the security provided by fences. Bees provide a vital service for biodiversity and can provide pollination for surrounding farms.  One example featured in the guide is a horticultural solar energy project that has recently commenced at Agriculture Victoria's SmartFarm Tatura site as part of the Victorian Agriculture Energy Investment Plan. Researchers will investigate the potential for integrating solar panels within a pear orchard to improve fruit quality by protecting the trees and fruit from extreme heat events and sunburn.  Meanwhile, in Parkes, NSW, solar grazing has delivered benefits for the local Show Society. Councillor Ken Keith, Mayor of Parkes and Show Society member, said that trialling merino wethers at the Parkes Solar Farm in 2019 produced excellent results both in the wool's quality and the sheep's health, despite the impacts of drought.  “It's a win-win for the community and the solar farm” said Mr Keith. “It helps the Show Society stay afloat while reducing the maintenance costs for the solar farm.”  The Clean Energy Council is promoting the broader scale adoption of agrisolar to maximise land productivity in Australia and support the long-term success of renewable energy in regional and rural communities across the country.  The guide was officially launched last week at the Clean Energy Council's Large-scale Solar Forum.